Let this ornament bring your family close together around the tree to ponder the miracle of the Salt Lake Temple.

Made out of a lightweight and very durable transparent acrylic, this ornament will not weigh your tree down and can definitely withstand being dropped by the little ones should they get too curious around the tree.  The acrylic is cut into a 4 inch circle and then laser etched with the name of the temple and a graphic depicting an artistic representation of the Salt Lake Temple. 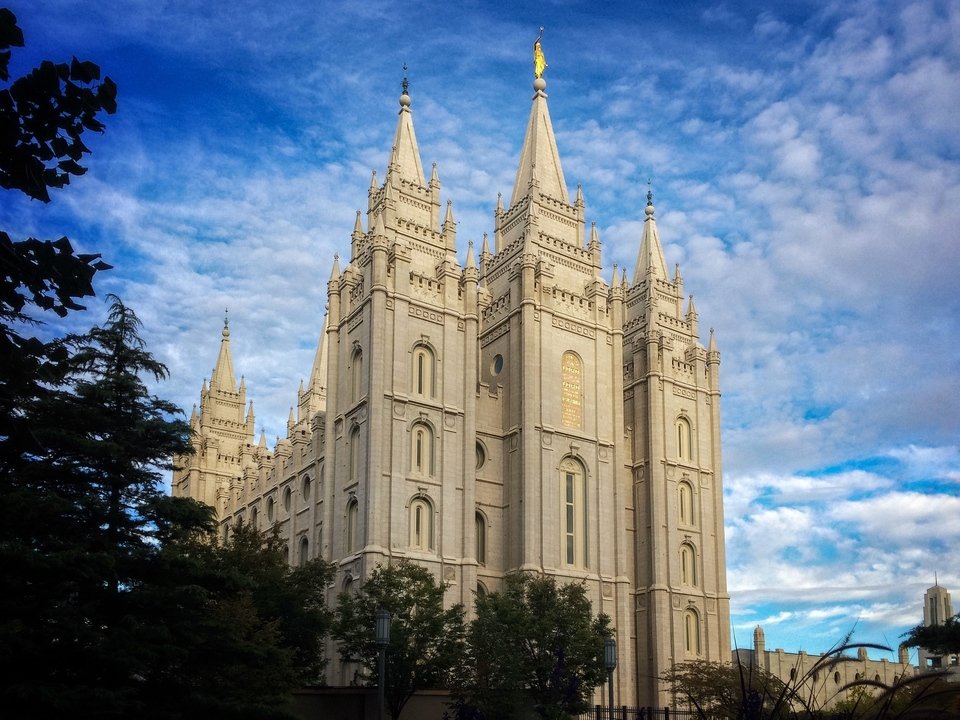 At a news conference held on April 19, 2019, President Russell M. Nelson announced that the Salt Lake Temple would close on December 29, 2019, for approximately four years of renovation and restoration including improvements to the surrounding grounds and facilities.1 On March 12, 2021, modifications to the planned interior of the temple were announced, which will significantly increase capacity and likely increase the length of closure.2 Highlights of the project include the following:

Positioned on Salt Lake City's center block, known as Temple Square, the spires of the Salt Lake Temple rise amid downtown high-rises and super malls. Sharing the block are the North Visitors' Center and South Visitors' Center; the Tabernacle, home of The Tabernacle Choir at Temple Square; and the Gothic-style Assembly Hall. East of the temple is the masterfully landscaped Main Street Plaza, complete with reflecting pool. Beyond the plaza is the Church's world headquarters, known as the Church Office Building, and the Joseph Smith Memorial Building—a multipurpose Church building, which has become a popular wedding event center. The Church's Conference Center, an architectural masterpiece, lies directly north of the temple. Every holiday season, Temple Square is transformed into a highly popular display of hundreds of thousands of Christmas lights.

The Salt Lake Temple was the fourth temple built in Utah (though its construction was started first) and the first built in the Salt Lake Valley.

The Salt Lake Temple was the only temple dedicated by President Wilford Woodruff.

With its distinctive spires and statue of the angel Moroni, the Salt Lake Temple is an international symbol of the Church.

The Salt Lake Temple is the largest temple (most square footage) of the Church.

The building of the Salt Lake Temple was seen as a fulfillment of the prophet Isaiah's prophecy: "And it shall come to pass in the last days, that the mountain of the Lord’s house shall be established in the top of the mountains, and shall be exalted above the hills; and all nations shall flow unto it" (Isaiah 2:2).

Brigham Young said of the Salt Lake Temple: "I want to see the temple built in a manner that it will endure through the Millennium."

The walls of the Salt Lake Temple are nine feet thick at the base and six feet thick at the top. Brigham Young had originally favored building the walls from adobe with a thin veneer of stone, which would require very thick walls, but the decision was later made to use solid hand-carved pieces of granite of the same thickness.

Original plans for the Salt Lake Temple called for two angel Moroni statues—one on the east central spire and one on the west.

The Salt Lake Temple is the first temple to feature a standing angel Moroni statue, which is 14-feet tall and attached to a rod that extends 27 feet into the tower, terminating with a 4,000-pound counterbalance to keep the statue immovable. The angel was created by Paris-trained sculptor Cyrus E. Dallin and built in Salem, Ohio.

The Salt Lake Temple is the first temple to have the addition of a second baptistry announced, replacing the former cafeteria. It was announced on March 12, 2021, during an extensive renovation of the temple and Temple Square.

The presentation of the endowment was originally delivered by live acting in the Salt Lake Temple.

The Salt Lake Temple originally featured beautiful hand-painted murals on the walls of its progressive-style ordinance rooms: Creation Room, Garden Room, World Room, Terrestrial Room (no murals), and Celestial Room (no murals). The Creation Room murals were not added until 1915 when Church member Frithjof Weberg of Norway was commissioned with the task; the walls had previously been white.

The Salt Lake Temple was completed the afternoon before the dedication. That evening, invited government officials, businessmen, and their wives were given a complete tour of the temple. It was the first time that a temple had been opened to the public prior to its dedication.

The Salt Lake Temple was dedicated on April 6, 1893—three years before Utah became a state in 1896.

The Salt Lake Temple was closed on July 29, 1962 for extensive renovation that included demolition of the old annex; cleaning of the exterior stone; replacement or upgrade of all mechanical systems, plumbing, wiring, carpeting, and light fixtures; reupholstering of furniture; and redecoration of the entire building. The temple reopened on May 21, 1963.

The dedication of a temporary annex was held on March 7, 1963. This building would later become the North Visitors' Center.

On August 13, 1993, the contents of the Salt Lake Temple record stone—a hollow stone in the foundation—were removed 136 years after they were originally placed there by Brigham Young and other leaders. Items placed in the stone included books, pamphlets, periodicals, and a set of Deseret gold coins. Because the stone had cracked, the paper items were severely damaged by moisture. Salvaged materials are now housed in the Church History Library.

On March 18, 2020, a 5.7-magnitude earthquake struck the Salt Lake Valley during the renovation of the Salt Lake Temple, causing the trumpet to be shaken from the grasp of the angel Moroni statue and land on the tower roof.

Angel Moroni. The angel Moroni depicts both a messenger of the restoration of the gospel and a herald of the Second Coming: "for the Son of Man shall come, and he shall send his angels before him with the great sound of a trumpet, and they shall gather together the remainder of his elect from the four winds" (JS-M 1:37).

Battlements. The castle-like battlements that surround the temple symbolize a separation from the world as well as a protection of the holy ordinances practiced within its walls.

Earthstones. The earthstones, located at the base of each buttress, represent the earth—the "footstool of God." Although the earth is currently a telestial kingdom, it will transition to a terrestrial kingdom at the coming of the Millennium; and at the end of one thousand years, it is destined to become a celestial kingdom.

Moonstones. Located directly above the earthstones, the moon is depicted in its various phases around the temple. The changing moon can represent the stages of human progression from birth to resurrection or represent the patron's journey from darkness to light.

Sunstones. Located directly above the moonstones, the sunstones depict the sun—a symbol of the glory of the celestial kingdom.

Cloudstones. High above the sunstones on the east center tower are two clouds with descending rays of light (originally planned to be one white and one black with descending trumpets.) The parallel of this symbolism is found in the Old Testament. Once temples were dedicated in ancient Israel, they were filled with the "cloud of the Lord." At Mount Sinai, the children of Israel saw this cloud as both dark and bright accompanied by the blasting of a trumpet.

Big Dipper. High on the west center tower is a depiction of the Big Dipper, a constellation used by travelers for thousands of years to find the North Star. It is an appropriate symbol for the temple where patrons come to get their bearings on the journey home.

Handclasp. Each of the center towers features a pair of clasped right hands identified as the "right hands of fellowship" cited in Galatians 2:9. In Jeremiah 31:32, the Lord uses the handclasp to denote covenant making—an act at the very heart of temple worship.

All-Seeing Eye. Located atop each of the center towers of the temple is the all-seeing eye of God, which represents God's ability to see all things.4