Let this ornament bring your family close together around the tree to ponder the miracle of the Gila Valley Arizona Temple.

Made out of a lightweight and very durable transparent acrylic, this ornament will not weigh your tree down and can definitely withstand being dropped by the little ones should they get too curious around the tree.  The acrylic is cut into a 4 inch circle and then laser etched with the name of the temple and a graphic depicting an artistic representation of the Gila Valley Arizona Temple. 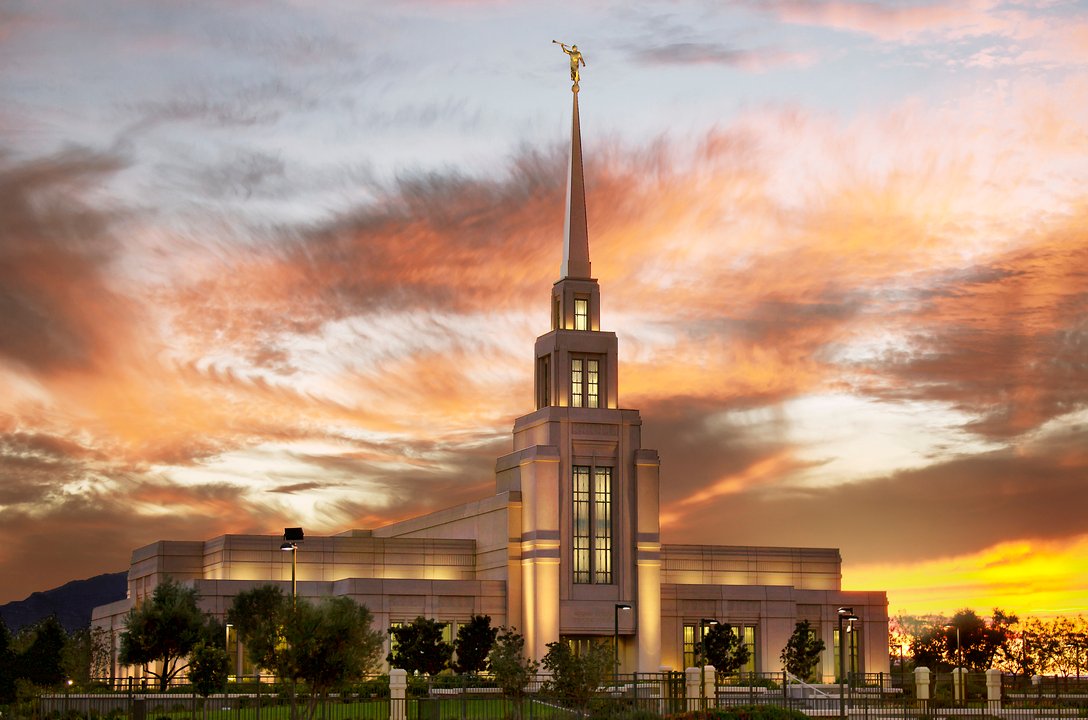 Standing at the foot of the mighty Mount Graham, The Gila Valley Arizona Temple is a treasure for the many Saints with deep roots in the rural communities of Arizona's Gila Valley. The temple is highly accessible at its location on Highway 70 in the aptly named community of Central, located about halfway between Pima and Thatcher. Adjacent to the temple are a meetinghouse and two Church-owned recreational softball fields.

Two of four Church-owned baseball fields in the community of Central were cleared to make way for The Gila Valley Arizona Temple and an adjoining meetinghouse.

The groundbreaking ceremony for The Gila Valley Arizona Temple was held on the 97th anniversary of Arizona becoming a state. The shovels were specially arranged so that ground was broken at the location where the Celestial Room would stand.

On September 22, 2009, the spire and a shining gold-leafed statue of the angel Moroni were installed atop The Gila Valley Arizona Temple, taking the building to its final height and form.

A total of 90,865 visitors toured The Gila Valley Arizona Temple during its public open house period, resulting in 1,299 comment cards and 139 missionary referrals.

The Gila Valley Arizona Temple serves faithful Saints of southeastern Arizona and southwestern New Mexico, who previously traveled some 150 miles or more to attend the Mesa Arizona Temple or the Albuquerque New Mexico Temple. Located at the base of the soaring Pinaleño Mountains, the Gila Valley is best known among members of the Church as the home of President Spencer W. Kimball, 12th President of The Church of Jesus Christ of Latter-day Saints. Though born in Salt Lake City, President Kimball was reared in Thatcher from the age of 3. And after returning home from a mission and being sealed to Camilla Eyring in the Salt Lake Temple, the Kimballs settled in Safford to raise their children and run an insurance business. In the early 1980s, President Kimball initiated an unprecedented worldwide temple-building program—one of the hallmarks of his ministry.

On Wednesday, September 17, 2008, a petition for a height-restriction exception went before the Graham County Planning and Zoning Commission from the Corporation of the Presiding Bishop to allow a proposed 100-foot spire on the temple. The Commission voted unanimously to recommend the exception to the Graham County Board of Supervisors.2

On Sunday, September 21, 2008, local priesthood leaders announced the site for the temple to be property at the stake ballpark in Central—a complex of four baseball fields located between Pima and Thatcher along Highway 70. The temple and an adjoining meetinghouse will be constructed on the northern side of the property with the temple on the east, nearer the highway. The northern fields are to be replaced by parking and landscaping while the southern fields and concession stand will be retained.3

On Monday, October 20, 2008, the Graham County Board of Supervisors unanimously approved an exception to zoning requirements, as recommended by the Graham County Planning and Zoning Commission in September, that allows a 100-foot spire on the temple and a steeple on the meetinghouse.4

On Thursday, January 15, 2009, the Church was issued a building permit for construction of the temple and adjacent meetinghouse from the Graham County Planning and Zoning Department.5 This action cleared the way for groundbreaking, which was announced in Gila Valley sacrament meetings on Sunday, January 25, 2009.