Let this ornament bring your family close together around the tree to ponder the miracle of the Brigham City Utah Temple.

Made out of a lightweight and very durable transparent acrylic, this ornament will not weigh your tree down and can definitely withstand being dropped by the little ones should they get too curious around the tree.  The acrylic is cut into a 4 inch circle and then laser etched with the name of the temple and a graphic depicting an artistic representation of the Brigham City Utah Temple. 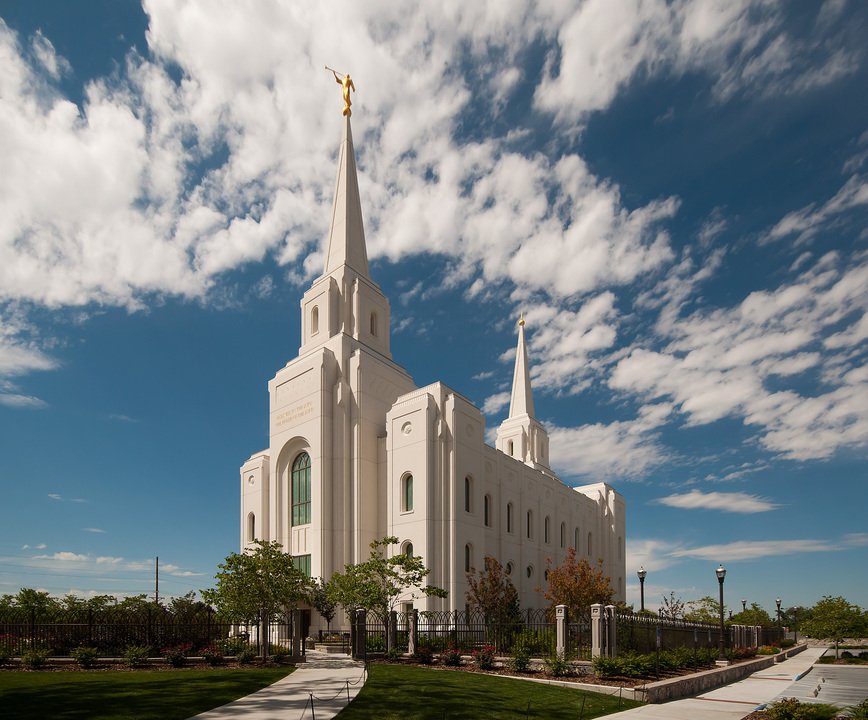 The gold-leafed statue of the angel Moroni was hoisted and secured into place atop the Brigham City Utah Temple on Tuesday, July 12, 2011, from about 1:40 to 2:30 p.m. Weather conditions delayed the planned 12:00 noon raising. All four streets surrounding the temple block were closed to allow the approximately 5,000 spectators to view the proceedings.

"I am home," said President Boyd K. Packer in his opening remarks at the Brigham City Utah Temple groundbreaking held Saturday, July 31, 2010. President Packer, president of the Quorum of the Twelve Apostles, and his wife Donna are natives of Brigham City. President Packer had attended elementary school 80 years before on the very site where he stood. He continued, "I can see in my mind's eye a temple sitting here in about two years time. It will be gorgeous, it will be white. You will see in the design of it reflections of previous temples that have been built, particularly the Salt Lake Temple. It will be a beacon from all over the valley."1

On November 5, 2009, sale of the Brigham City Utah Temple site formally closed, advancing the temple to the construction approval phase.

On December 3, 2009, the City Council of Brigham City held a public hearing to receive input on a request by the Church to vacate both the plat that subdivides the temple site into lots and the associated easements. The resolution was unanimously approved, reverting the block back to a single lot and giving the Church control over the utilities on site.2

On June 15, 2010, the Planning Commission of Brigham City approved plans for the Brigham City Utah Temple in conjunction with a Permitted Use Permit application submitted by project manager Kerry Nielsen. Building and landscape designs were created to reflect both the history of Brigham City and the classical designs found at the Logan, Manti, and Salt Lake temples. The warm white temple, faced with precast concrete limestone, will point east toward the historic Brigham City Tabernacle with the top of the angel Moroni reaching several feet above the highest point of the tabernacle. The west façade will be detailed similarly to the east including a second spire. The temple has a 9,000-square-foot footprint with three above-ground levels. Parking will consist of 123 surface stalls, 130 underground stalls, and 29 street stalls. Fencing will be installed around the temple grounds themselves but not around the surrounding parking lot. The grounds will include a water feature and fruit trees, paying homage to the area's roots in fruit growing.3

On July 15, 2010, the City Council discussed planning activities for the temple groundbreaking, which included the closure of numerous streets and intersections.

Central Elementary School
-->On October 26, 2009, Church officials announced that the Brigham City Utah Temple would be constructed on a downtown block on Main Street known as Central Square, located directly west of the Brigham City Tabernacle.4 Speculation of this location began shortly after the announcement of the temple when a sign was posted on the site indicating that sale of all seven commercial lots on the block were pending. Central Elementary School once stood on the site, but it was razed several years ago in a downtown redevelopment effort. President Boyd K. Packer had attended school there as a boy.

On October 3, 2009, during the Saturday morning session of the 179th Semiannual General Conference, President Thomas S. Monson announced the construction of the Brigham City Utah Temple—Utah's fourteenth temple. Utah's most recently constructed temples were dedicated earlier that year in the cities of Draper, Utah and South Jordan, Utah.5

The Brigham City Utah Temple will be the fourteenth temple built in Utah and the first built in Box Elder County.